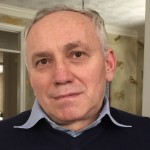 Steve Vlasta Vitek received his master’s degree in Japanese and English studies from Charles University in Prague, Czechoslovakia, in 1980. He worked as an in-house translator for the Czechoslovak News Agency (ČTK) in Prague (1980-81), and for Japan Import Center in Tokyo, Japan (1985-86). He has been in independent practice working mostly for patent law firms as a translator specializing in translation of Japanese, German and French patents and articles from technical journals, as well as in translation of patents and other documents from Czech, Slovak, Russian and Polish in United States since 1987. Before moving to Eastern Virginia in 2001 where he lives now, he spent almost two decades in San Francisco and the Bay Area. He has been writing articles about translation for publications for translators in United States on paper and online for more than two decades, including the ATA Chronicle, NCTA’s Translorial, NCATA’s Capital Translator, The Gotham Translator of the New York Circle of Translators, etc. His website is at PatentTranslators.com, and his blog, subtitled Diary of a Mad Patent Translator, is at patenttranslator.wordpress.com.