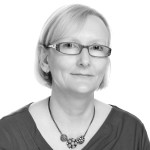 Alison Hughes is a French-to-English translator and copywriter for the creative industries. She has been a qualified member of the Institute of Translation and Interpreting since 2001 and is the coordinator of its Media, Arts & Tourism network.

Back in 1981, with an MA in French, German and Economics from Glasgow University under her belt, she set off for a job in the export department of Mumm Champagne in Reims. Three years later, with her language skills honed, her typing skills improved and her champagne appreciation skills second-to-none, she moved to VAT 69 Whisky in Central London.

Then in 1987, following the Guinness takeover of the small distillers, Alison found herself in a newly-formed translation team at the company’s London headquarters. She then replaced the translator in the Glasgow office before embarking on a freelance career in 1997.

Alison presented for the first time at the 2015 ITI Conference and is now on a quest to help translators step out from behind their computer screens and embrace the wider business world… one step at a time.

She will deliver a webinar on translating for the creative industries for eCPD on 12 April 2016.